Divine Provocation: Brutality and Genocide in the Old Testament

What follows is the introduction from
Darek Barefoot’s latest article, Read post in PDF: Divine Provocation: Brutality and Genocide in the Old Testament

“Blessed is the one who has not stumbled over me.” Luke 7:23

In Scripture God provokes. He confronts us with shocking images and dares us to take offense. He invites us to feel morally and intellectually superior to his purported revelation. How could the Old Testament deity who has been so often described as monstrous be the transcendent mind that gave birth to time and space? Who can put up with such an account of the world’s meaning, much less defend it? 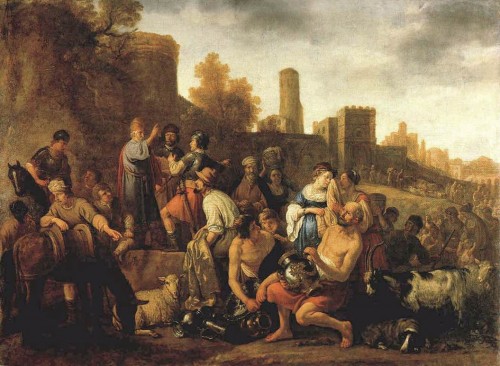 Readers eager to reject the idea of the Bible as revelation will make short work of it and move on. Those who linger will notice that the God of Scripture tantalizes even as he provokes. He who wraps himself in darkness promises that within the obscuring cloud we will find him to be pure light without the faintest shadow (Ps 97:2; 1 Jn 1:5). The same God who frequently erupts with anger claims to be patient and merciful. The divine law that seems at so many turns callous, demanding the death penalty for a tediously long list of infractions, commands that a man show kindness to his personal enemy and have empathy for the foreigner, the widow, and those who live on the margins of society (Exod 23:4; Deut 24:17-22). From the gray fabric of the law Jesus will draw out these threads of color and make of them his radical teaching of peace (Matt 5:44-48). The clash of kindness and condemnation can make us pause—or deepen our grievance.

Provocation is one of the themes of the exodus narrative, in which God and his people test and provoke one another. The New Testament book of James, in saying that God tests no one, appears to run counter to this sacred history (Jas 1:13). A closer look at James reveals that the testing under discussion there has the object of inducing someone to sin. The Pentateuch says that God tests his people not to cause them to sin but to dissuade them from it, to do them good (Deut 8:16). God’s testing of the people draws them back from destruction, while their testing of him moves them toward it. How it is that the provocative God tests no one is less puzzling than it first appears, but larger riddles remain.

No provocation is more obvious than the early Old Testament accounts of genocidal holy warfare against the inhabitants of Canaan, including multiple massacres either at God’s command or carried out as a devotion to him. Wholesale killing in honor of a tribal or national deity is also a stock feature of ancient near eastern culture, sickeningly familiar from sources such as the Mesha Stele.

I will argue in what follows that the record of divine commands to exterminate populations, showing no mercy to non-combatants including women and children, ought to be read by Christians as inspired provocation. Mass killing as an act of religious devotion is intended to disturb and test the reader, who can only interpret it correctly by drawing on spiritual resources, not merely the tools of historical and literary analysis. It seems that nothing but the image of genocide portrayed as actual history is sufficient to shake the reader into awareness of the gravity of the sins the accounts condemn.

My goal is not to paint the God of the Bible as a doting, grandfatherly figure who would under no circumstances bring terror and destruction upon human beings. It is undeniable that the Orchestrator of nature and human history has seen fit not only to allow misery and death but to channel them to ends that he proclaims are good. God’s sovereignty acknowledged, commanding people to carry out massacres of non-combatants as as a holy act falls into a different category than divine superintendence of calamities. Imagine a sermon entitled, “Would You Have Chopped to Death Little Boys and Girls to Prove Your Devotion to God?” Until pastors are willing to make such a sermon a regular part of Christian worship, warnings that we imperil the integrity of the Bible by seeking an interpretive solution are hollow, particularly when set alongside invitations to recoil in horror at, for example, partial birth abortion.

Neither is my goal to escape from biblical moral limits that don’t appeal to modern sensibilities. There were first century Jews whose literal reading of the biblical prophecy led them to expect that Elijah of old, who disappeared into the sky, would reappear dramatically before the coming of the Messiah (2 Kgs 2:11; Mal 4:5; Mk 15:36). By interpreting prophecy other than literally Jesus did not undermine the challenging message given through the new “Elijah” (John the Baptist, Luke 1:17), instead he affirmed that message (Mal 4:6; Mk 9:12-13).

For Christians the answers to the most profound moral questions the Bible raises, to the extent they can be discovered, will be found in Jesus (Col 1:2-3). To understand the provocation posed by divinely commanded massacres we must consider the way Jesus communicates and the light he casts backward on all that led up to him. First, however, we will look at some peculiarities in the Old Testament text itself.

To read the article in its entirety, download  Divine Provocation: Brutality and Genocide in the Old Testament